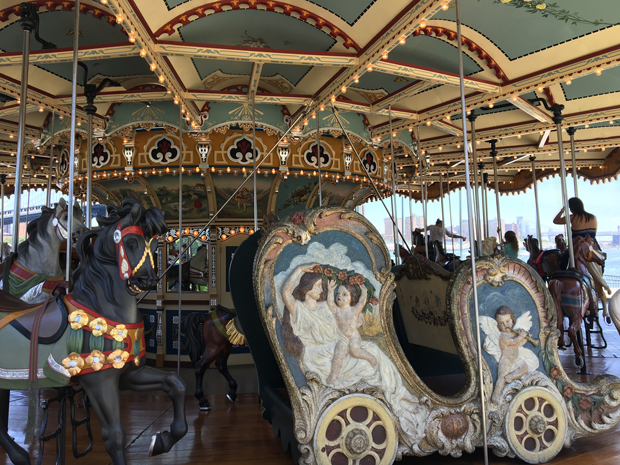 We went to Jane’s Carousel, in Dumbo, Brooklyn yesterday. I’m really fascinated by carousels and we make it a point to visit every carousel we can. Here is the last one we went to. This one is a beauty. The detail is incredibly ornate and  every horse and chariot is a piece of art.

Here is the story of this wonder:

It originally was in Idora Park in Youngstown, Ohio which officially closed its doors after 85 years in 1984, after a firedevastated much of the park, including its famed 1929 wooden coaster, The Wild Cat. The carousel, scorched but intact, sold at auction that year. Each of its 48 horses and 2 chariots were sold individually, but at the end of the auction all the bids were tallied up and a single buyer was offered the opportunity to take the entire carousel for the combined sum. New York real estate developer David Walentas and his wife Jane bought Philadelphia Toboggan Company for $385,000. 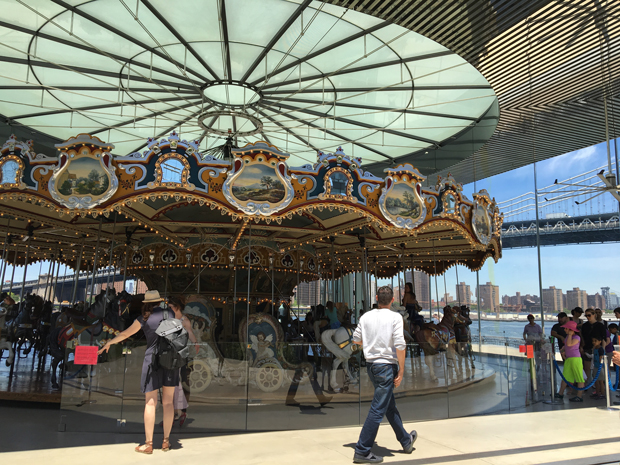 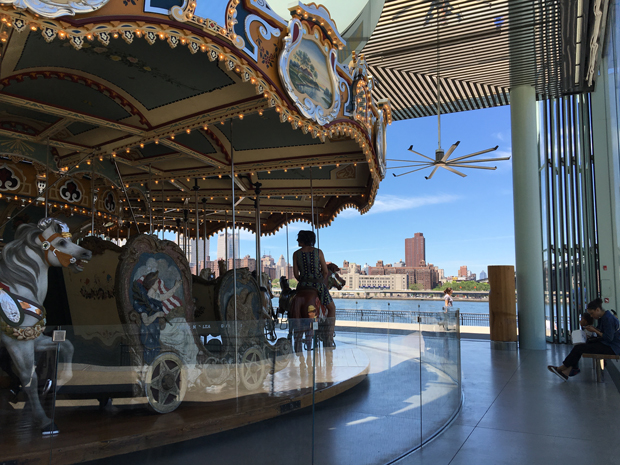 They were in the market because Walentas was developing a waterfront shopping complex in this Brooklyn neighborhood, DUMBO (Down Under Manhattan Bridge Overpass). They hired a specialized company to dismantle and ship the whole lot to Brooklyn, where Jane, who has a master’s degree in fine art, began researching carousel restoration.

Instead of outsourcing, Jane took on the massive restoration herself. It’s an incredible story of obsession and dedication. First she documented everything, taking pictures and samples and notes on the main pieces of the carousel. The original paint was unsalvageable so she sent the parts to a chemical stripper who removed dozens of  layers of paint. Jane had a carpenter repair the parts, prime them and then set them aside in storage to focus on the stars of the show, the horses and chariots. 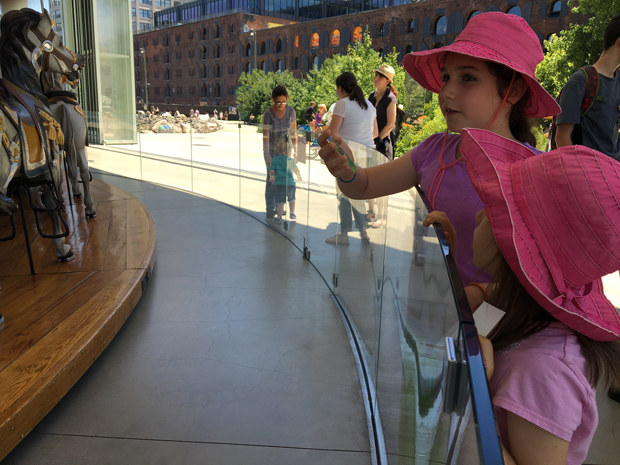 Said Jane: “I spent years, mostly alone, scraping the many layers of park paint to reveal the original palette and beautiful carvings. I had hoped to be able to keep the horses in their factory paint, but was eventually convinced that it was not possible. Much of the paint was fragile and the surface of most of the horses was rough and needed too much repair to have been left as they were. Once again, I did precise matches of the factory colors, and traced, drew and photographed everything I uncovered. I worked scraping paint off the horses, sporadically over the course of about 16 years.”
In June of 2004, after decades of work, she moved into a new studio, hired more help and set about doing all the repairs to the individual horses. Once repaired, they were repainted with painstaking fidelity to the original look, and then Jane took it a step further and gilded all the horses’ metallic fittings and decoration, originally aluminum leaf or aluminum leaf with a gold wash, in palladium and 24 carat gold, no less!! She also hired a car customizer from Mercedes-Benz to do all the hand pin striping work on the horse bridles. 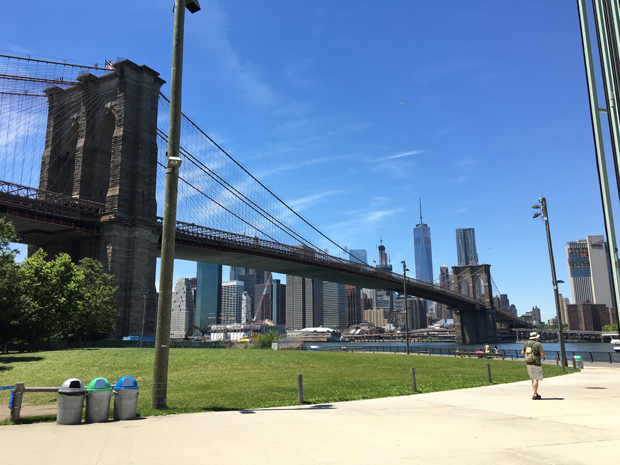 In 2006, the carousel was ready to be put back together and on display. Over the years the shopping center project had been scrapped to be replaced with a Empire Fulton Ferry Park, so the Walentas set up the carousel, now renamed “Jane’s Carousel” in honor of its new mother, in another of their properties, a converted spice warehouse in the DUMBO neighborhood where people could see it among the art galleries but not ride it. 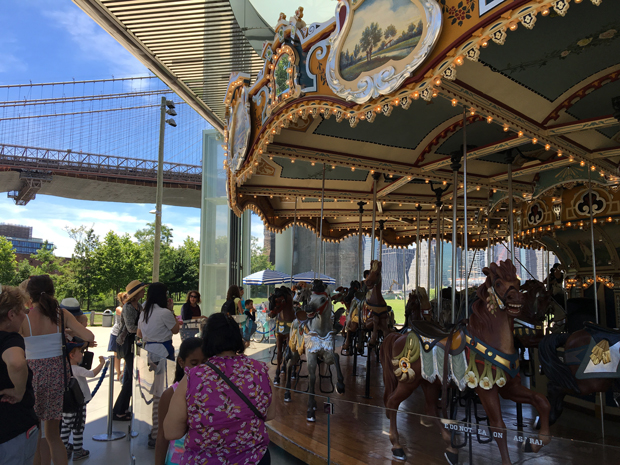 After struggling with various committees, the Walentas got permission to install the carousel on the waterfront in front of the Civil War-era Tobacco Warehouse. They hired French architect Jean Nouvel to design a pavilion to house it and he created the $9 million transparent acrylic jewel box that showcases the beauty of the carousel during the day, shows the riders a most spectacular view and that would at night be lit so that the horses cast huge shadows on the white floor-to-ceiling window shades. They also donated $3.45 million to the park for landscaping and nighttime lighting that allows the park to stay open until 1:00 AM. 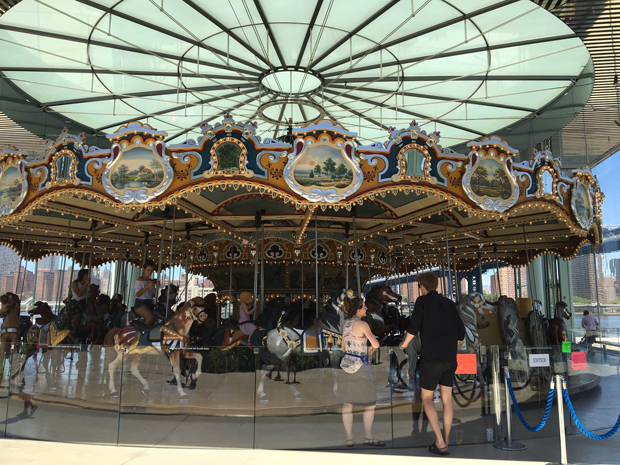 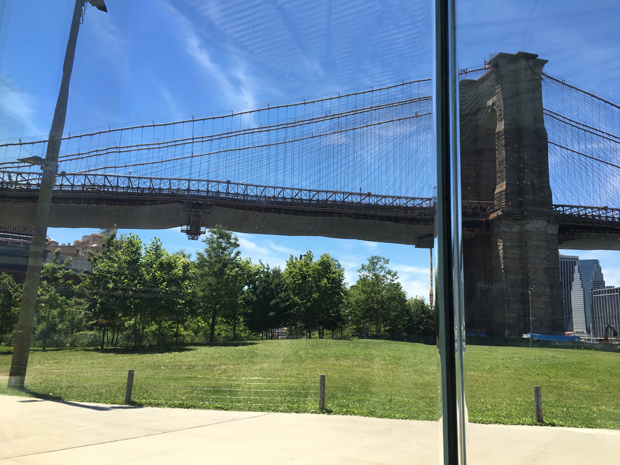 And they donated this 1922 Philadelphia Toboggan Company carousel with palladium and 24 carat gold fittings! And we thank you for it. We’ll be coming across the river more often.