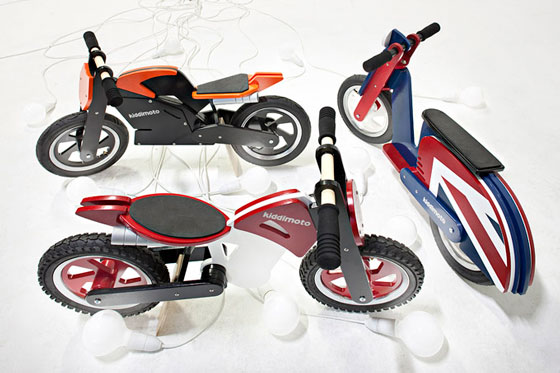 These are the coolest bikes. Balance is something so important to learn for kids and in life in general and so many skills are based on it. UK based Kiddimoto has created a range of wooden bikes which are designed to teach young children exactly that – balance. The lightweight birch bikes are easy to steer and the rubber tires provide a smooth ride for those little tushes.

The Kiddimoto range comes in five styles, each based on a motorbike classic. From the Scooter, inspired by the mod scooter of the 60s, and the Chopper, a nod to future Easy Riders, to the Super Bike, based on real race bikes and the Scrambler, a more traditional bike shape and the James Toseland Hero bike. All I want to know is when I ride it, will it break? 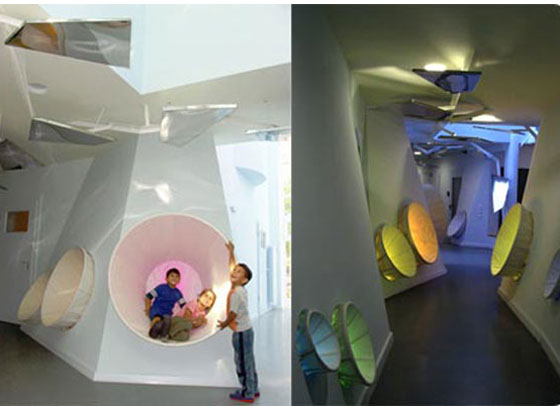 What a fantastic space. I want to play in this Danish day care center, called Kitakinda. Why can’t they make something like this in NYC? This tree-inspired Danish day care center has a tree trunk as the foundation of the center, which creates the security blanket for the entire structure. Dream Blossoms grow out of the trunk and create sleeping areas for the kids to snuggle up and nap in like little wombs. What a sweet alternative to the beds or mats laid out like in a hospital. Can you tell I go weak at the knees at Scandinavian design? 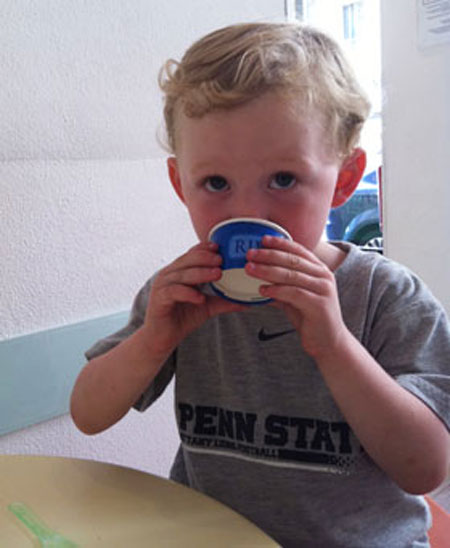 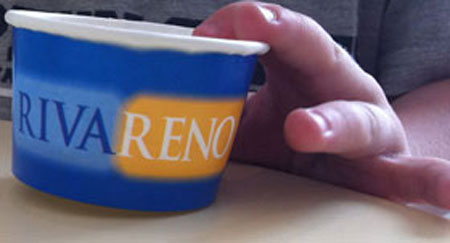 Ciao from Milano, where it’s hot but the indulgence cool and creamy. This post from the Mediterranean is all about gelato, the dreamy Italian delicacy sold in no fewer than three shops per street and enjoyed by everyone from elderly ladies to gorgeously suited businessmen at all hours of the day. In my 2-kilometer linear existence so far, my favorite place is Riva Reno (Viale Col di Lana, 8). Only the lovely folks who work there outshine this bright shop that serves this delicious gelato. My little one can’t get enough of it and cried when he’d licked dry his “cuppa piccola” of San Lucas, a white chocolate flavor. I feel like I ought to try the 10 or so other fruit-based and desserty flavors, but this San Lucas fills my dreams. Bonus: The three people who have served me so far all spoke English and were thrilled to help me learn Italian. 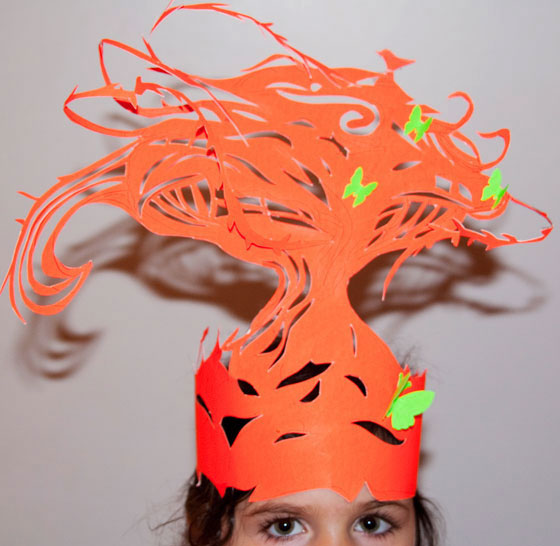 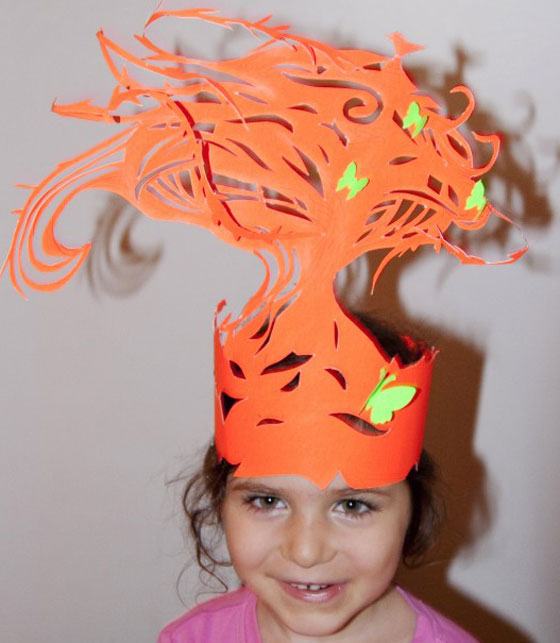 Well, here it is. The paper hat inspired by the Stuart McLachlan hats in the post below! Oona helped me draw the pattern but of course, I did all the cutting.

If you want to make one, here is how: Measure the circumference of the wearer’s head just to make sure your paper is wide enough. We got a sheet of paper from the stationery shop – they sell them in various colors. Then, make a mark in the center to make sure your main design is centered. Using a pencil, draw your design, but very lightly. Erasing it afterwards is difficult with all the fragile cuts. Then make sure the kids are nowhere near your workspace and get to work, using an X-acto knife (this is the only kind of cutter that will make such tiny cuts but use with extreme care). I used Stuart MchLachlan’s website for inspiration. This was inspired by a tree hat he did. And to attach the branches to the hat, I used Glue Dots. And for the little butterflies, I cheated and used a large punch like this and small one like this. I used Scotch Tape to attach the two ends of the hat around the head – nothing fancy. Let me know if you try making one of these. And if you send me a photo of it, I will post in the Bellissima Kids Facebook page and tweet it! 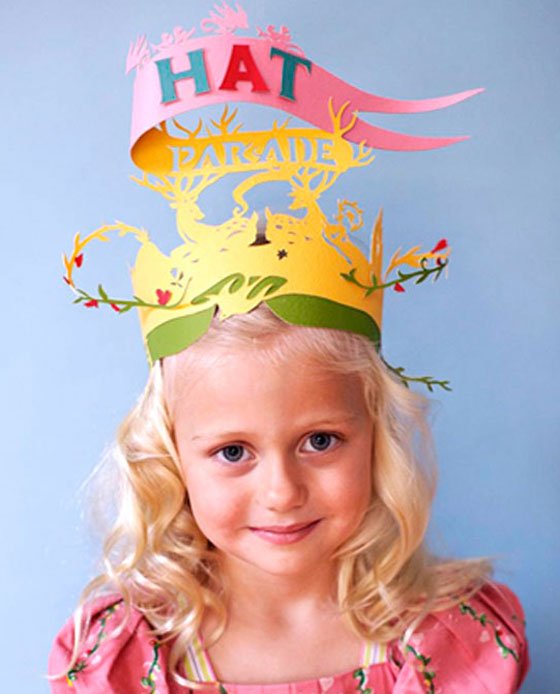 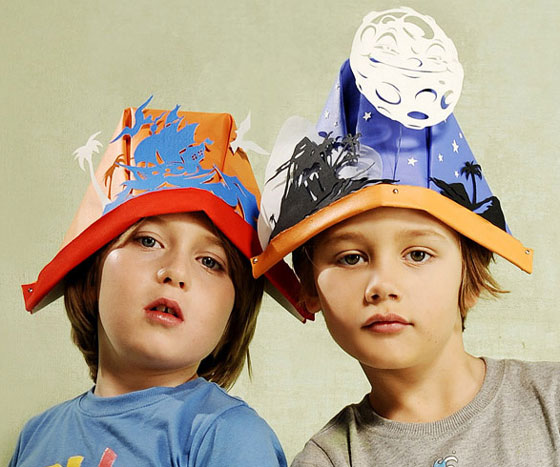 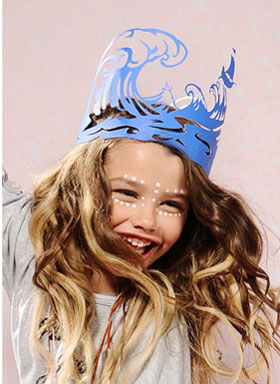 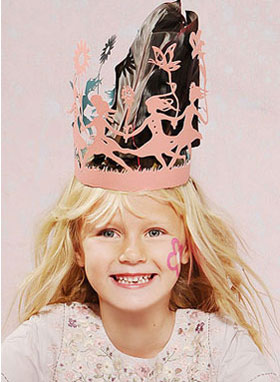 I am completely blown away by these paper creations by mega-talented Australian illustrator, Stuart McLachlan. He recently developed this new technique using cut paper to create images and art objects for the fashion, art editorial and advertising areas. These pieces have been used extensively on the fashion runway and have been published in Vogue, and many other places. And check out his incredible website, especially these amazing illustrations of Alice in Wonderland and his catwalk creations – they are wondrous. We are so inspired, we are going to attempt a hat like these. Well, at least a hat influenced by these…will keep you posted. 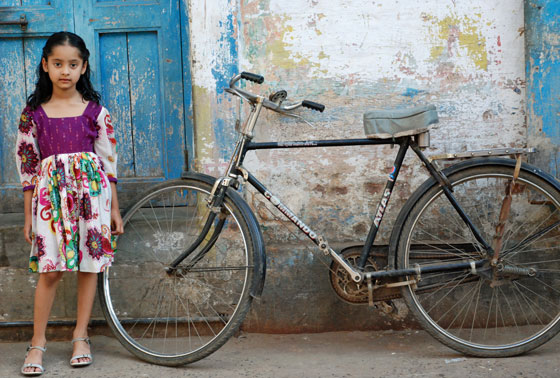 I met the designer/owners of Ode last weekend at Playtime (click to see video of Playtime) and can’t believe I didn’t know of them before. This dynamic sister team are from a village in India called…yes, Ode. Poetic right? And fitting that their label has followed suit. They re-imagine traditional textiles from around the world to make these colorful and whimsical fashions. I just love the fun cuts, bright fabrics and especially the block prints. And they are adding shorts and other items to their coming collections. I’ll keep you posted. Now for the good news, they are having a sale right now and the Arya dress and Julia dress are still available. Take a look! 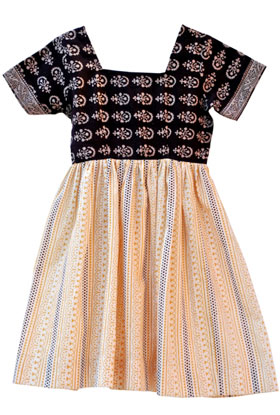 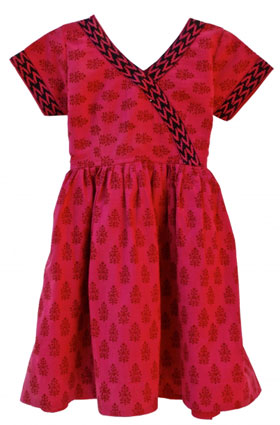 This is the first charity on Bellissima Kids and one that is very close to our hearts. When our darling little first born, Oona was a mere 2 weeks old, we noticed what looked like a scratch under her eye. In three weeks, this mark grew like a monster. Her pediatrician was on vacation, so I frantically did some research and realized it was a Strawberry Hemangioma, a type of birth mark. I remember breastfeeding with one arm while desperately surfing the internet to find help. All the specialists wanted us to wait months to be seen but I knew this needed immediate care. By some dumb luck or providence, I called a prominent OB-GYN that I know and asked him if he knew where I could take her. Turned out he knew a Dr. Waner, a world renowned pioneer in successful treatments for hemangiomas and vascular anomalies – they were affiliated with the same hospital! He got us an appointment with Dr. Waner the next day – his day off. When Dr. Waner saw the hemangioma, he told me that “it must be treated immediately”, booked Oona into St. Luke’s Roosevelt Hospital and removed it by laser surgery two hours later. Dr. Waner ‘s deep love of children is palpable and he managed to put two sleep deprived, desperate parents at ease with his light heartedness and kindness.

When we think of the road that we could have gone down with Oona of probable blindness in that eye, disfigurement and/or scarring trying to remove a large hemangioma, I still shudder and start to tear up. If you go on his website, you will be in awe and in tears yourself at the inspiring stories. We love you Dr. Waner.

Hemangiomas are not uncommon and can be fatal. Some of the more serious hemangiomas grow so large, they grow their own arteries and can cause heart failure. This is a very interesting article on CBS about Dr. Waner. He donates a large percentage of his surgeries to those who cannot afford surgery, and is committed to reaching more children in need. If you would like to get involved and donate, you can do so on this link. Also, you can redeem your American Express Membership Rewards points for a donation! For every 1,000 points you redeem, they receive $10.00. Sounds like a deal to me! 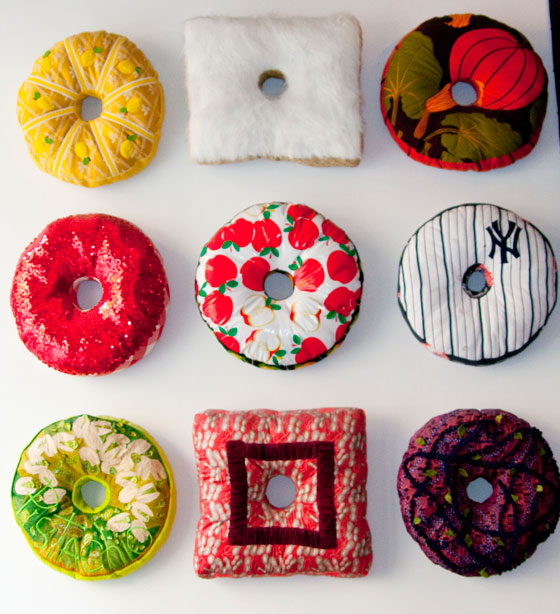 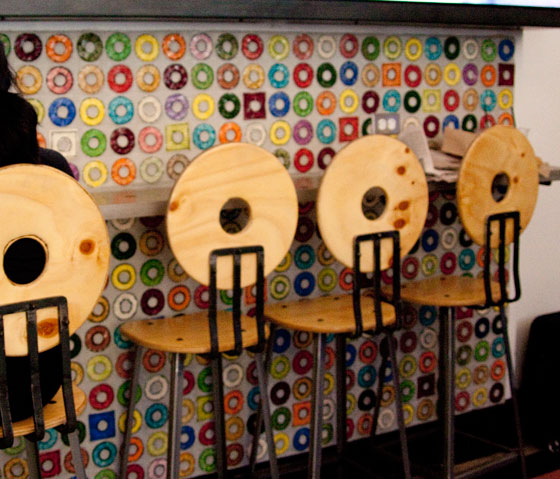 Could it be the doughnut is the new cupcake? This place has been around for quite a while and their new shop has been there a few months, so I’m a day late and a doughnut short (excuse the pun). I only became aware of them a few weeks ago when I went to a brunch at my friends’ place and one of the guests brought a selection of these doughnuts from The Doughnut Plant. We cut them all up into pieces and made a smorgasbord out of them. Mmm.

Well, I was passing by their new place on 23rd the other day and couldn’t resist. As you can see, their decor is a doughnut fantasy. Love the doughnut cushions – I want those for my place. And now about the doughnuts: they have quite a menu, and unusual things like Green Matcha Tea, and Oatmeal, and of course all sorts of other things like Valhrona Chocolate, and Square Jelly Doughnuts, which Mark, the owner invented. They make their own jelly for the doughnuts, so none of that artificially colored glue that you get in other jelly doughnuts. And they have a deliciously refreshing Blueberry Lemonade. Oona and I were fighting over the last drop. And on his website, there is a touching pictorial history of his family bakers which goes back to his grandfather. And now a photo of my favorite, Crème Brulée, in all it’s glory. 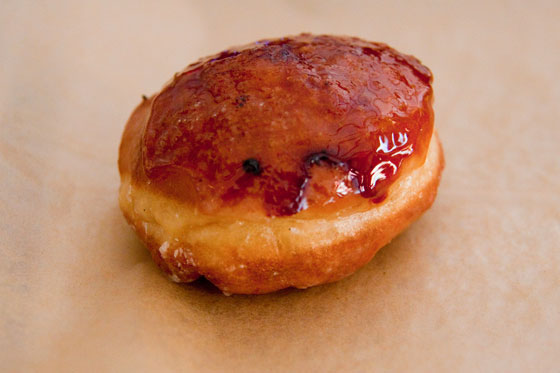 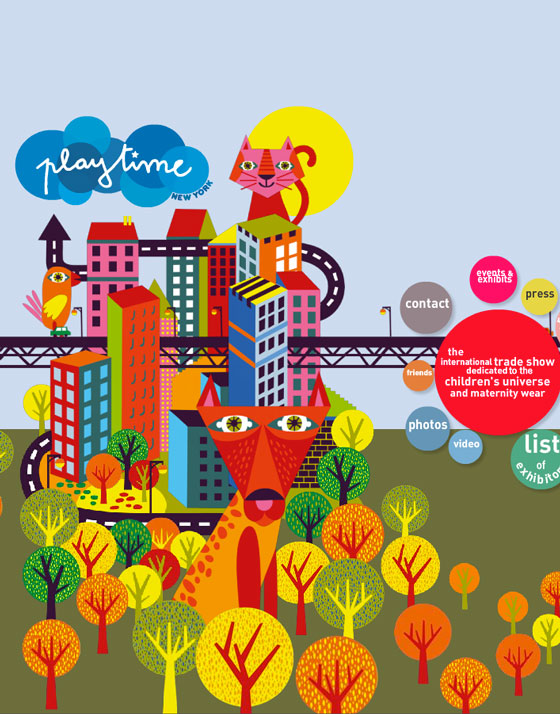 I had such a great time at Playtime New York this weekend! The trade show which is all about Children’s Fashion-and there was even some maternity wear there. It was in a beautiful venue at 82 Mercer, and Sébastien de Hutten and his team did such a great job in organizing it. I was honored to meet many talented designers from some wonderful labels – some established and some brand new launches. It was so inspiring that I wanted to give you a taste of what I saw, so I filmed and edited this vlog – the very first one on Bellissima Kids. (I shot it on an everyday handycam – not my usual production quality but I think you’ll get an idea). We can look forward to seeing these ranges in the year to come. The soundtrack is My Lucky Day from The Elephant DVD, by Eric Herman, the current kid’s sensation (more about that here). I hope you enjoy it!

write an essay for me